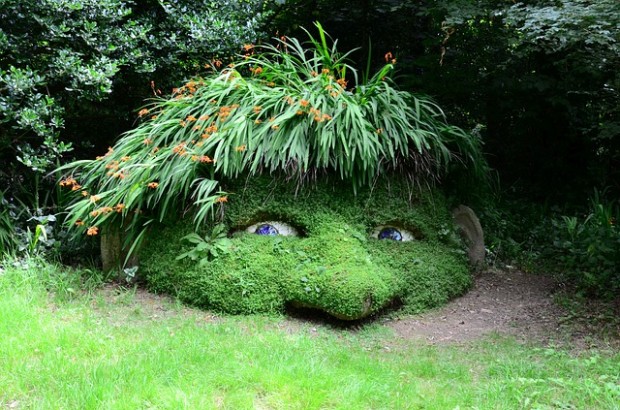 What I’d like to offer here is an example of how you can take a similar concept–a seemingly silly non-academic topic–and use it in a classroom on a smaller scale. In my class, before launching the zombie project, we spent several class periods working with garden gnome liberation, and my students had the option of writing one of their larger (analysis) papers about gnomes.

The Nuts and Bolts:

I created a handout with a short and silly text put together from Internet websites about the garden gnome liberation movement.

In one class, together we read the text out loud, brainstormed thesis statements, and broke into small groups to write mini essays. My class is only an hour long, but an hour and a half would be even better.

In addition to the initial practice of writing an entire mini essay with the time constraint of one class period, you then have student texts which you can use for follow up activities.

The options here are endless because you can use these texts to practice any writing skill you’d like: revision, sentence level editing, etc. For example, during the next class, I distributed hardcopies of all the mini-essays, and as a class we did sentence level editing and discussed the efficacy of the various thesis statements. As an assignment, they had to rewrite the opening sentences from their classmates’ essays and write an opening paragraph to a new essay responding to one of the essays.

Why?! Whereby A Pedagogical Explanation is Offered:

It’s a manageable way to practice the processes of essay writing. If you’re learning to play basketball, you do drills to help you isolate and improve upon the skills you need to play the game. The game itself, while invaluable experience, is chaotic and many things happen at once. To teach writing, I’ve been experimenting in class with the mini-essay, which I like to think of as a drill or a way to break down and improve upon specific skills. In one class we performed the process of writing an essay, from research to thesis brainstorm, through the first draft. We crafted a text, in manageable-sized chunks, with no time for angst or writer’s block.

You can discuss writing using student texts as examples. Often it is most effective to use student-generated text as the starting point in activities. But how do you make your students comfortable with sharing texts? One way I’ve found is to go silly and quick–my students agreed that their identities as authors were not at stake in a gnome essay written in a group in a brief period of time. In fact, they enjoyed sharing their writing. This has the added benefit of building camaraderie as a class, and getting students used to both sharing their writing and commenting on their peers’ writing.

You can use the same text to work individually, in groups, and as a class.

What’s the first step in writing an essay? When I asked my class, they said pick a topic. This is often a daunting step that students do alone, but operating on a mini-level, we were able to fill the entire chalkboard with brainstorms for a thesis. Students then got to choose a thesis and broke into groups of three to write an essay (2-3 paragraphs) in fifteen minutes. Later, the students also did an individual homework assignment, followed by more work with the entire class. Hopefully this allows the students to gain from the creativity and perspectives offered by different group sizes.

One example: the first thesis statement offered by a student was, “This is stupid,’ which I wrote verbatim on the board. What a wonderful pedagogical opportunity! Those sorts of thesis statements are almost impossible to defend, and later, when we had filled the entire board with more developed ideas, we could all see the difference in thesis quality.

It’s fun! Let’s face it: sometimes silly is enjoyable. It also helps students relax about the idea of essay writing. As expected, as we read the text there was a lot of laughing and groaning.

But wait … silly can also be a useful pedagogical tool. The gnome background information, for example, was written almost like a satire, with obvious parallels to major issues such as human rights, animal rights, and environmentalism. Talk about these real world issues in class, and you may find that student passions quickly divert you from the craft of writing. While such discussions are important, sometimes it is useful to set aside those topics in which students are most deeply invested so we can examine the elements of writing. Don’t worry–the text is silly enough that students still will be enthusiastic, noisy, and mildly rowdy.

We spent a total of three class periods (one week) on gnomes. I would suggest two to three classes–after this student enthusiasm may wane.

As outlined above, I brought a hardcopy of all the group mini essays to the next class period, and we did sentence level workshops and discussed thesis statements. I won’t outline those here because they are available elsewhere, and how you approach it will depend on your interest as a teacher. One example for sentence can be found here.

My students did have one homework assignment on gnomes, which they did in conjunction with a short reading from the writing textbook, They Say I Say. That reading looked at different “templates’ for how you might state an argument in an academic essay. I then asked my students to do the following:

1) Write a new opening sentence for five of the class essays.

2) Write an opening paragraph to a new essay that responds to one of your classmate’s garden gnome essays. Your paragraph should have a clear point and should place your point in the context of the larger conversation over garden gnomes. In other words, you need to acknowledge the argument of your classmate and be clear about what you trying to support/oppose/amend/complicate/qualify.

My students also had the option to write about gnomes for their second larger project. I have attached a worksheet I gave students who selected the gnome option, as well as my general assignment sheet for that project.

If you aren’t familiar with the issue, you really should get on it–it’s shocking! In fact, as one bemused Writing Center tutor remarked when confronted with one of my student’s papers, there’s child sex slavery, and then there are garden gnomes.

Finally, samples from the mini essays written in class:

Garden gnome liberation is a hoax. Garden gnomes don’t want to be free, they do not want anything. In fact, they are merely inanimate objects that people personify.

The MENJ believes that gnomes, just as humans, should have certain inalienable rights to freedom as in the declaration of independence. While it’s not ethically wrong to posses a gnome for personal purposes, it is ethically wrong for liberators to coerce owners of these object into giving up their paid for belonging.

Garden gnomes are created in factories out of ceramic or plastic materials. Therefore, they are inanimate objects. Due to the fact that these garden gnomes resemble small people, they are often personified. Gnomes are made in factories, humans are not. In conclusion, gnomes are not human, therefore they don’t get rights.

It is commonly agreed that the European garden gnomes have been wrongfully enslaved for far too long. While the garden gnomes deserve their freedom, they have been taking too much of the focus from the real problem. It is not only the enslavement of the gnomes, but also the pink flamingos, garden angels, ceramic dogs, and in certain parts of the year, light-up deers and jack-o-lanterns, they all deserve freedom.

We understand that some people hold garden gnomes to a higher standard than other garden ornaments, but we feel that all yard creatures put in just as much effort as the gnomes and receive just as little reward or appreciation.

All of these garden ornaments have dealt with much struggle and strife. Along with standing in the yard all day to protect the garden, without pay, they must withstand long, hard nights, harsh weather, and no appreciation. In some cases, such as the deer, they risk injury from falling off the roof. The pink flamingos risk drought, and rarely have shrimp to eat, which could eventually lead to the loss of their pink color, which will make them less beautiful to their owners and they will be out on the street with nowhere to stay. In conclusion, you cannot just single out the gnomes. They deserve their freedom, but so do all of the other garden helpers.

Gnomes are known most significantly for their disabilities. Gnomes are as far as we know: mute, completely paralyzed, and incapable of living independently. If gnomes were freed and could apply for welfare, with that many gnomes needing help it would be a large economic disposition.

With the loss of garden gnomes, the cost of lawn maintenance will dramatically increase. Similar the abolition of slaves, land owners will be faced with the trouble of more expensive alternative methods such as hiring illegal Canadian immigrants.