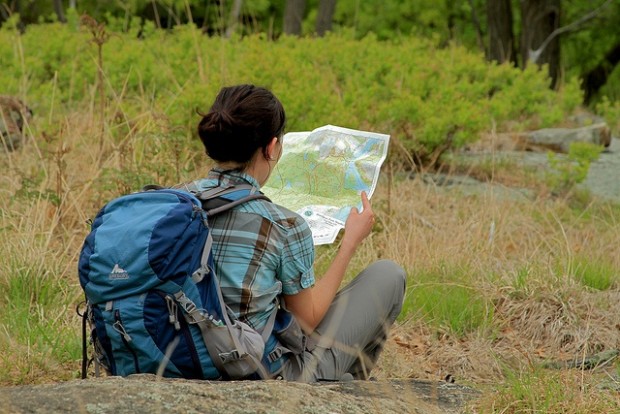 Send your class on a rhetorical scavenger hunt in the library! Students research a text by splitting into teams, each assigned a component of the text’s rhetorical situation to investigate. Later, they report their findings to the rest of the class.

How I did it: A week before my class’s visit to the Rasmuson Library, I had my students go through the online library tutorial at https://library.uaf.edu/blogs/library-basics/.  I also assigned the text for the project. In this case, I chose “A Modest Proposal’ by Jonathan Swift, because its rhetorical situation is far removed from the students’ experience, and because the students need to dig deep into history to understand exactly what is going on with the text.

On the day of the library visit, we didn’t start out in our classroom, but rather in the west foyer of the library. (It’s helpful to write a reminder on the chalkboard if your class isn’t meeting in the classroom, and to allot a couple of minutes for those who forget and go to the classroom first.) I broke the class into four teams–my method for doing so changed from one semester to the next. I then randomly assigned each team one of the four components of rhetorical situation: Rhetor, Audience, Context, and Purpose. I told them they were to research their assigned component of the text, and to be prepared to present the material to the class. (More on this later.) I also said that each team needed to provide a bibliography of five references used in their research, and that at least three needed to be non-digital. (I was flexible if a library book was only available as an e-book, which is the case with a sizable bit of Rasmuson’s collection.) I reminded the students that if they needed any assistance, that they could speak with either me or one of the library staff.

I allotted an hour total in the library, including the introduction to the assignment in the foyer. I checked in with each team about halfway through the time to see how they were doing and if they had any questions. For some students, it can be a challenge for them to keep on task for the whole hour, so I found this check-in helpful in getting those students back on track.

What happened after the hour in the library depended on the class’s schedule. When the class met for an hour and a half, we cut the library time a little short and went back to the classroom for each group to give an oral presentation of about five minutes, allowing ten minutes at the end of class to discuss the presentations. When I taught this lesson with an hour-long class, though, I had the students duplicate their work by either typing it out or scanning it, and putting it in a folder on Google Drive for the whole class to read later. I found that, in this latter approach, the students had trouble following through with providing their material to their classmates; if I had to do it again, they would give a short presentation during the next class session.

Overall, in the two times I have conducted this class exercise, I have been impressed with the depth and ingenuity of the students’ research. It’s a short and simple demonstration of the level of research they need to do as they progress in academic writing. This exercise is also great for 111x students to become acquainted with the Rasmuson Library and its many resources.